They’re back! This morning’s trip with Christopher and Danielle out of the Dallas/Fort Worth area of Texas was very Anglers fishing with me, out of CB’s Saltwater Outfitters on Siesta Key, had good action with reds, snook and trout in shallow water in Sarasota Bay and Gasparilla Sound on CAL jigs with jerk worms, shad and grub tails and with snook on flies in the ICW at night recently. 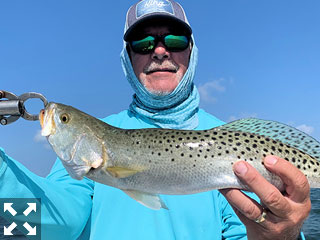 Mike Perez with a nice trout caught and released on a CAL jig with a grub while fishing Sarasota Bay.

Fly and spin fishing anglers also had some action on deep grass flats of Sarasota Bay with trout and more. Anglers practiced social distancing on the boat and we were miles from another boat or person during the course of my trips.

Martin Marlowe, from NY and Bruce Marlowe, from SC, fly fished the ICW at night with me and had good action catching and releasing snook and a couple of blues on my Grassett Snook Minnow fly. Mike Perez, from Sarasota, and Louis and Mikalah Smith, from IN, caught and released trout, Spanish mackerel and bluefish in Sarasota Bay on Clouser flies and CAL jigs with a variety of tails recently.

Keith McClintock, from Lake Forest, IL, fished a couple of days with me and had good action catching and releasing several reds, snook and trout on CAL jigs with jerk worms, shad and grub tails in Gasparilla Sound. The best action was with reds in skinny water in Sarasota Bay.

Fishing shallow flats for catch and release reds and snook is a good option now. Fishing deep grass flats of Sarasota Bay is a good choice for action with a variety of species including trout, pompano, blues and Spanish mackerel.

Check the coastal gulf for tripletail, Spanish mackerel or false albacore when conditions are good. Fishing dock lights in the ICW at night is also a good option for snook and more. 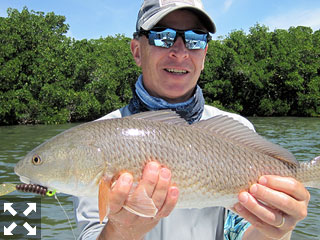 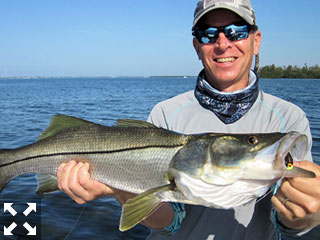 Dave Reinhart, from MA, fished a couple of days in Sarasota with me and had great action catching and releasing numerous reds to 26 inches, several snook to 30 inches and trout to 20 inches on CAL jigs with grubs.