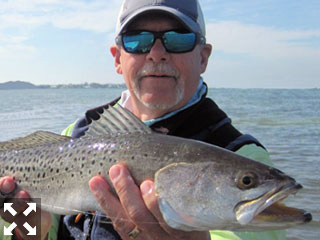 Mike Perez, from Sarasota, waded a sandbar in a previous February with Capt. Rick Grassett and caught and released this big trout on a fly.

Trout and redfish should be good shallow water options this month. You may also find trout along with blues, Spanish mackerel, pompano and flounder on deep grass flats. Look for sheepshead, flounder, reds and more around docks. Catch and release night snook fishing around lighted docks in the ICW may be a good option if it’s not too cold. Spanish and king mackerel and cobia may show up in the coastal gulf by the end of the month.

Snook, reds and spotted seatrout are closed to harvest on the west coast of Florida. The Florida FWC has enacted a temporary modification of regulations for reds and snook, in the areas affected by last year’s red tide. The area extends from Pasco County, south to Gordon Pass in Collier County. Reds, snook and spotted seatrout (of any size) are catch and release only in that zone until May 31, 2020. Full details including exact boundaries can be found by CLICKING HERE →. Since these species are now closed, use tackle heavy enough to catch and release them quickly. 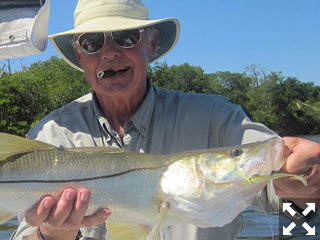 Keith McClintock, from Lake Forest, IL had good action catching and releasing snook and in backcountry areas of Gasparilla Sound while fishing with Capt. Rick Grassett in a previous February.

Since snook are temperature sensitive, I won’t target them following strong fronts when water temperatures dip below 60 degrees. However, I have had some great night trips catching and releasing snook on flies in the ICW at night this time of year. Since larger baitfish aren’t that plentiful this time of year, snook will gorge themselves on glass minnows and shrimp. Small white flies, like my Grassett Snook Minnow, DOA Shrimp (3’ or the newer 2-3/4”), DOA Tiny TerrorEyz or CAL Jigs with shad tails and jerk worms will all work well.

You may also find snook in rivers, creeks or canals this month. Fishing may be good in these areas on a blustery day when it isn’t fit to fish anywhere else.

I like wider profile flies and lures in these areas due to the baitfish that may be found there. Fly anglers should score with wide profile baitfish patterns, such as Lefty’s Deceiver, fished on a sink tip fly line. Spin anglers should do well with CAL jigs and 4” swim baits and jerk worms, DOA Baitbusters or suspending plugs. Fish the deep spots, usually on outside bends, for the best action. 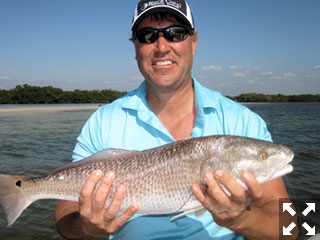 Stephen Liska had good action catching and releasing reds in backcountry areas of Gasparilla Sound while fishing with Capt. Rick Grassett in a previous February.

You might find reds in potholes or along the edges of bars and shallow flats when the tide is low. As the tide rises, they will feed higher on shallow flats, particularly on sunny afternoons. I like 1/16-ounce CAL jigs with shad tails or jerk worms for reds in shallow water. If it is too shallow or grassy to fish an exposed hook, a Mustad or Owner weedless hook will allow you to fish plastic baits in these areas.

Fly anglers should score with lightly weighted flies, like Clousers or my Grassett Flats Minnow, with weed guards on floating lines with 10’-12’ leaders. You may also find big trout in skinny water in the same places you find reds. The same lures, flies and techniques that you use to target reds will work for big trout in those areas. I release all over slot trout since they are usually females and I feel that they are important to the health of our trout fishery.

You’ll find trout on deep grass flats. I like flats that have a good mix of grass and sand and good tidal flow. Flats that are close to passes are often good choices since water temperatures may be warmer there. Following fronts, silted up water will cover deep grass flats close to passes, often affecting fishing in those areas. Other good grass flats may be on points or around bars. I like to drift and cast ahead of my drift with CAL jigs and a variety of plastic tails, DOA Deadly Combos or weighted flies on sink tip fly lines to locate trout. Once you’ve located them you can shorten your drift or anchor on them.

In addition to trout, you may also find blues, Spanish mackerel, flounder or pompano, depending on water temperature and conditions, on deep grass flats. The technique to find them is the same as for trout, although there may be other clues. Pompano may “skip” on the surface when you drift or run past them giving their presence away. When that happens, set up a drift upwind of where you saw a pompano and cast ahead of your drift. Blues and Spanish mackerel may force bait out of the water or feed on the surface. You may need to add heavy fluorocarbon or wire when blues and mackerel are mixed with trout on deep grass flats. 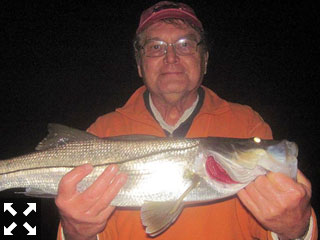 Fishing docks is another good option this time of year, especially when the tide is low. You might find reds, sheepshead or flounder under docks. I like docks that are deep (3’ or more) and have a good tidal flow. Fish the end of long piers to find the deepest water. Also, look for big boats moored on docks or on boat lifts, which is also an indication of deeper water.

Older docks with lots of barnacle and oyster growth usually hold more baitfish and predators. I like CAL jigs with shad tails, grubs or jerk worms or weighted flies fished on sink tip fly lines when fishing docks. Be sure to let your jig or fly get down close to the bottom.

There may be some action in the coastal gulf by the end of the month with king and Spanish mackerel and cobia. When the water warms to the high 60’s to low 70’s, these fish will move into our area from the south as they migrate north. Look for Spanish mackerel on the surface or in passes. Cobia may be swimming on the surface, around buoys, channel markers and crab trap floats or over structure.

February can be a tough month to fish. With frequent fronts and cool water, fish aren’t always in an eating mood. If you’re able to pick good tides combined with favorable weather conditions, you should be successful. If you don’t have that luxury, you might do better by sleeping in and fishing later in the day when it’s warmer. Our natural resources are under constant pressure from red tides fueled by agricultural and residential runoff, freezes, increasing fishing pressure and habitat loss and degradation, please limit your kill, don’t kill your limit!