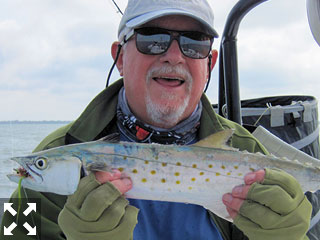 Bill Morrison with a Spanish mackerel he caught and released on a Grassett Flats Bunny fly in Sarasota Bay.

Anglers fishing with me, out of CB’s Saltwater Outfitters on Siesta Key, had good action catching and releasing trout, bluefish & Spanish mackerel on deep grass flats on flies and CAL jigs with a variety of tails in Sarasota Bay recently. In light of the current situation, social distancing and sanitizing procedures were followed on the boat.

Bill Morrison, from Holmes Beach, fished Sarasota Bay with me recently and had good action catching and releasing blues, Spanish mackerel and trout on my Grassett Flats Bunny fly.

Fishing deep grass flats of Sarasota Bay has been a good option for action particularly if conditions aren’t good in the gulf for tarpon. 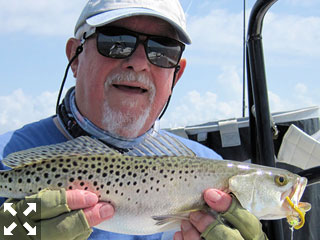 Bill Morrison with a trout that he caught and released fishing Sarasota Bay with Capt. Rick Grassett recently.

Tarpon fishing in the coastal gulf is a good option now depending on conditions. Fishing deep grass flats of Sarasota Bay is a good choice for action with a variety of species including trout, pompano, blues and Spanish mackerel.

Fishing shallow flats for catch and release reds and snook is also a good option. Fishing dock lights in the ICW at night is usually dependable for snook and more.