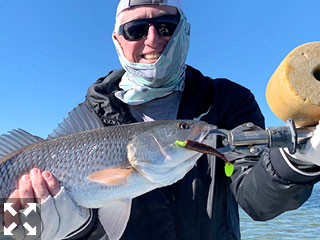 Anglers fishing with me recently, out of CB’s Saltwater Outfitters on Siesta Key, had good action with snook, reds and trout. Fly anglers caught and released trout on deep grass flats and snook in the ICW at night. Spin fishing anglers had good action with reds in shallow water on CAL jigs with shad and grub tails.

Marshall Dinerman, from Lido Key, and Keith McClintock, from Lake Forest, IL, each had great action on different trips catching and releasing numerous reds to 30” on CAL jigs with shad tails and grubs in skinny water. Dick Striano, from MA, fished dock lights with me at night and had good action catching and releasing numerous snook on a fly on another trip. Palmetto and Longboat Key winter residents, Jerry Poslusny and Rich Hunter, also got in on the night action catching and releasing snook and a couple of reds on flies. We sometimes encounter reds when fishing dock lights this time of year, which is a nice bonus to catch one on a fly. 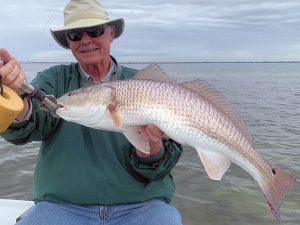 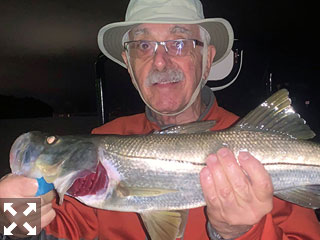 Dick Striano, from MA, with a snook caught and released on a fly while fishing the ICW at night.

Fishing shallow flats for catch and release reds should be a good option now. Fishing deep grass flats of Sarasota Bay is a good choice for action with a variety of species including trout, pompano, blues and Spanish mackerel. Fishing dock lights in the ICW at night is also a good option for snook and more as long as water temperatures don’t get too cool.