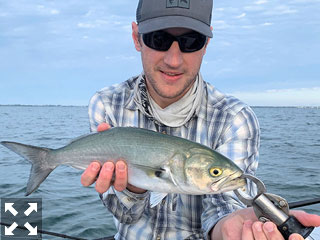 Matt Schenk, from CO, had great action with a variety of species including blues while fly fishing deep grass flats with Capt. Rick Grassett.

Anglers fishing with me recently, out of CB’s Saltwater Outfitters on Siesta Key, had good action with trout, blues, Spanish mackerel and pompano on deep grass flats, reds in skinny water and snook and blues at night. Fly anglers fishing deep flats with me scored with trout, bluefish, Spanish mackerel and pompano and snook and blues in the ICW at night. Spin fishing anglers also had good action on deep flats and catching and releasing reds on CAL jigs with shad and grub tails in shallow water.

Fly anglers Alan Sugar and Ray Hutchinson, from MI, had good action catching and releasing trout and Ray caught and released his first pompano on a fly. Dave and Shara King and family, of King Outfitters in Dillon, MT fished a couple of trips with me. Dave is an outfitter/guide in Montana whom I’ve fished with for many years, so it was good to show them our fishery.

The whole family got in on the action on a rainy, windy day on one of the trips and Dave and Shara had great action catching and releasing nice snook and bluefish on my Grassett Snook Minnow fly on a night trip.

Marshall Dinerman, from Lido Key, and his son-in-law, Alex, fished with me and Marshall caught and released a couple of nice reds including an over slot fish! Keith McClintock, from Lake Forest, IL, fished a couple of days with family members and they did very well catching and releasing numerous reds on CAL jigs with shad and grub tails. Matt Schenk and Dylan Lewis, both from CO, had fast action catching and releasing blues, Spanish mackerel, pompano and trout on Clouser flies on another trip.

Fishing shallow flats for catch and release reds and snook should be a good option now. Fishing deep grass flats of Sarasota Bay is a good choice for action with a variety of species including trout, pompano, blues and Spanish mackerel. Our natural resources are under constant pressure from red tides fueled by industrial, agricultural and residential runoff, freezes, increasing fishing pressure and habitat loss and degradation, please limit your kill, don’t kill your limit! 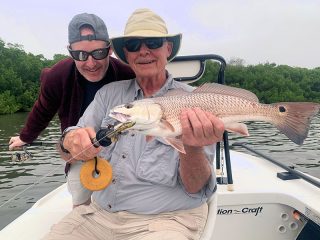 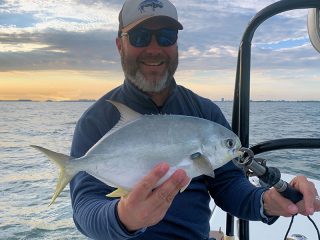 Dylan Lewis, from CO, had great action with a variety of species including pompano and blues while fly fishing deep grass flats with Capt. Rick Grassett. 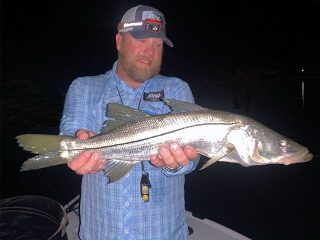 Dave King, from Dillon, MT, with a nice snook he caught and released on a fly while fishing at night with Capt. Rick Grassett. 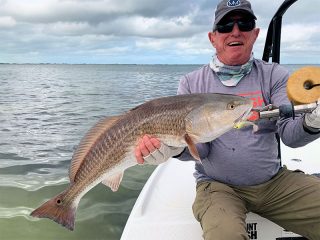 Marshall Dinerman, from Lido Key, with an over-slot red caught and released on a CAL jig with a shad tail while fishing shallow water with Capt. Rick Grassett. 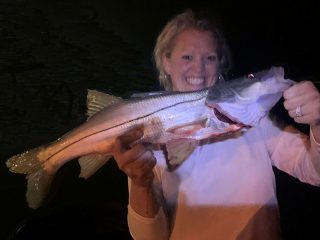 Shara King, from Dillon, MT, with a nice snook caught and released on a fly while fishing at night with Capt. Rick Grassett.