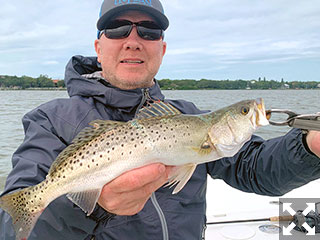 Brian Nafzinger with a trout caught and released on a CAL jig with a Shad tail while fishing Sarasota Bay.

We also caught and released reds and snook in skinny water also on CAL jigs with Shad tails. Tripletail action was good in the coastal gulf. 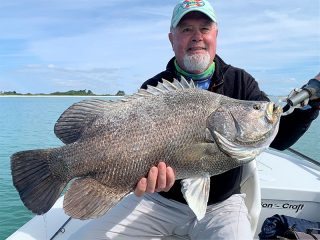 Jeff Hanna, from Englewood, FL, with a 15-lb tripletail caught on a fly while fishing with Capt. Rick Grassett.

Mike Perez, from Sarasota and Jeff Hanna, from Englewood, fished a day with me and they both caught tripletail. Jeff’s tripletail was the largest tripletail ever on a fly on my boat, 15-lbs!

Denton Kent, from Sarasota, and Rick Guzewicz, from Longboat Key, fished the next day and both also caught and released tripletail. Rick’s 7-lb tripletail was his first on a fly! A trip later in the week was slower but in addition to a tripletail we also caught a small cobia on a fly.

Keith McClintock, from Lake Forest, IL, also had a good day fishing lower Tampa Bay with me. Keith caught and released several snook, a couple of good reds, some trout and a flounder on CAL jigs with Shad tails. Fishing hard often pays off! 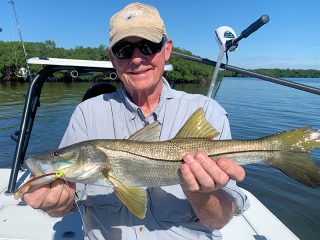 Keith McClintock, from Lake Forest, IL, with a snook caught and released on a CAL jig with a shad tail.

With stone crab traps in the water now, there is more structure to attract tripletail in the coastal gulf. Fishing mangrove shorelines for catch and release reds and snook in backcountry areas should also be a good option.

Fishing deep grass flats of Sarasota Bay is a good choice for action from a variety of species including trout, blues and Spanish mackerel.