September is one of my favorite months. Reds should be schooling on shallow grass flats and you also might find big trout there at first light. Baitfish along beaches will attract Spanish mackerel, false albacore (little tunny), sharks, tarpon and more. You should find snook around docks and bridges in the ICW. There should also be tarpon around bridges at night and in areas of Tampa Bay and Charlotte Harbor. Juvenile tarpon from 10 to 30-pounds should be a good option in creeks and canals. 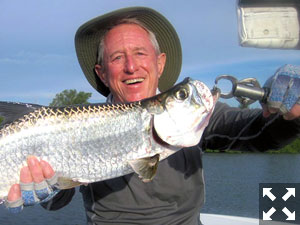 You might find juvenile tarpon in creeks and canals during September. Atlanta’s Marshall Dinerman caught and released this one on a fly while fishing with me in a previous September.

Tarpon will still be a good option this month. There may still be a few singles, doubles and small schools in the coastal gulf and if you’ve got the patience to wait them out it can be good. Many have moved to inside waters this month, so you’ll find them around bridges, over deep grass flats or deeper areas. When tarpon move into these areas, they are in a feeding mode. After a long migration and with their spawning duties completed, they need to rest and eat to restore themselves. Ladyfish will feed in glass minnow schools and tarpon will gorge themselves on ladyfish.

I have also seen tarpon, “ball” glass minnows into tight schools, and eat them by the bucket full! DOA Baitbusters, TerrorEyz and DOA Shrimp are my favorite tarpon lures this time of year. Fly anglers should score with wide profile patterns, such as Lefty’s Deceiver or EP flies. Small flies, like my Grassett Snook Minnow, tied on a 1/0 or 2/0 hook, are another good choice for tarpon that are feeding on glass minnows.

Snook, reds and spotted seatrout are closed to harvest on the west coast of Florida. The Florida FWC has enacted a temporary modification of regulations for reds and snook, in the areas affected by last year’s red tide. The area extends from Pasco County, south to Gordon Pass in Collier County. Reds, snook and spotted seatrout (of any size) are catch and release only in that zone until May 31, 2020. Full details including exact boundaries can be found at www.myfwc.com. Since these species are now closed, use tackle heavy enough to catch and release them quickly.

You should find snook this month around docks and bridges close to passes. They will also start making their move towards shallow flats where you might find them staging along sand bars or in potholes. Surface walking top water plugs or fly popper and Gurglers may draw some big strikes in shallow water early in the day. I often fish lighted docks and bridges for snook before dawn before moving to the flats after daylight. CAL jigs with shad tails and jerk worms, DOA Shrimp or small white flies, like my Grassett Snook Minnow, should all work well. The same lures and flies that work at night will be good for fishing the surf, too.

Reds are usually in large schools in September. You may find them in shallow water when the tide is high or along the edges of flats when the tide is low. Look for wakes, some as big as boat wakes, or “pushes” to locate them. If it is calm, a school of reds may look like a nervous patch of water or if there’s a ripple on the surface, the school may appear as a slick patch of water. Once you’ve located them, try to get in front of them and work around the edges of the school to avoid spooking the whole school. DOA PT-7 top water baits, shallow running DOA Baitbusters and CAL 4” shad tails should work well for spin anglers. Fly anglers should score with fly poppers, Gurglers and wide profile baitfish fly patterns. I like to be as quiet as possible in shallow water, using a push pole to move my boat. Electric trolling motors can be used sparingly, but varying the speed or running at faster speeds will often spook a school. It is great to find a big school of reds but remember, if you spook 1 fish you may spook the whole school. Running an outboard may make fish show themselves, but in the long run it will make them harder to catch. I sometimes also find big jacks and blues mixed with schools of big reds in shallow water. Not a bad problem!

Trout fishing should also be good this month. Look for big trout in skinny water in many of the same places that you find reds this month. They will be most active in low light, either first thing in the morning or at dusk, particularly if we’ve had an afternoon shower. Cloud cover in the afternoon will also reduce heating of shallow flats, which usually makes fish more active. The same lures and flies that you use for reds will work well for big trout in shallow water 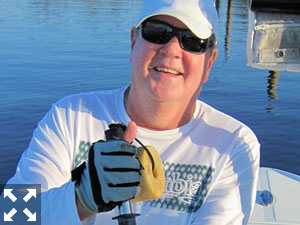 Look for flounder in shallow water, potholes, and around bars during Sept. Jack McCulloch, from Lakewood Ranch, caught this one on a CAL jig with a shad tail fishing with me in Tampa Bay.

You may also find trout mixed with blues, pompano, Spanish mackerel, flounder and more on deep grass flats of Sarasota Bay. I like to drift and cast ahead of my drift with DOA Deadly Combos or CAL jigs with shad tails or jerk worms. Fly anglers should do well with an Ultra Hair Clouser fly fished on a clear intermediate sink tip.

In addition to making a series of drifts to find fish, focus on bait schools, breaking fish or diving birds to find fish. You may find tripletail on buoys, crab trap floats or channel markers in Sarasota Bay this month. A DOA shrimp, CAL jig or a lightly weighted fly with a weed guard should get the job done.

You should also find tripletail along with cobia, false albacore (little tunny), king and Spanish mackerel in the coastal gulf this month. Look for surface activity to find the mackerel and albies and cast small white flies or CAL jigs with shad tails to them. I don’t usually target kings but will occasionally catch one around the edges of a feeding frenzy. Look for feeding frenzies that begin with ladyfish feeding in glass minnow schools and may end with everything else, including sharks or tarpon, joining the fray. Remember to “match the hatch” to be successful. You’ll need to add wire to your leader when toothy fish are around.

While you are looking for mackerel and albies in the coastal gulf, you can look for tripletail and cobia. However since stone crab traps haven’t hit the water yet this season, there are less places for them to be. In addition to abandoned crab trap floats, check channel markers, buoys and any floating debris. Artificial reefs are another good area to check. A DOA Baitbuster, 4” CAL shad tail or a wide profile fly should be good choices for cobia. Most tarpon flies also work well for cobia.

There are lots of options this month, but the key is usually to fish early or late for the best chance at success. An early start for snook or tarpon around lighted docks or bridges and then on to the flats for reds, trout and more is a good plan. There should also be good action in the coastal gulf for a variety of species. I usually tarpon fish as long as I can, wherever I find them! Our natural resources are under constant pressure from red tides fueled by agricultural, industrial and residential runoff and discharges, freezes, increasing fishing pressure and habitat loss and degradation, please limit your kill, don’t kill your limit!