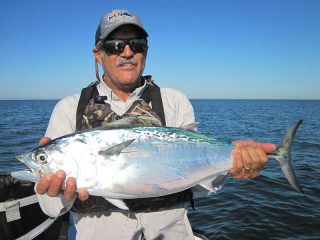 You may find blues, Spanish mackerel and pompano mixed with trout on deep grass flats this month. You should also find larger trout in skinny water along with reds. Snook will stage around bars and on shallow flats as they make their move towards winter areas. Action in the coastal gulf with false albacore, tripletail, Spanish mackerel, blues and more should explode!

Snook, reds and spotted seatrout are closed to harvest on the west coast of Florida. The Florida FWC has enacted a temporary modification of regulations for reds and snook, in the areas affected by last year’s red tide.

The area extends from Pasco County, south to Gordon Pass in Collier County. Reds, snook and spotted seatrout (of any size) are catch and release only in that zone until May 31, 2020. Full details including exact boundaries can be found at https://myfwc.com/news/all-news/redtide-sw/ . Since these species are now closed, use tackle heavy enough to catch and release them quickly. 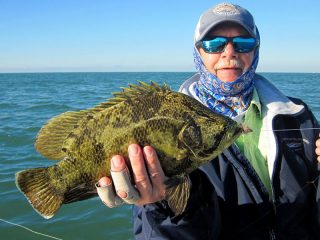 Mike Perez, from Sarasota, with a nice tripletail he caught and released in Sarasota on flies with Capt. Rick Grassett in a previous November.

You should find snook staging around docks and bridges in the ICW and along sand bars and in potholes on shallow flats. They may be along mangrove shorelines when the tide is high. I like CAL jigs with 3” and 4” shad tails, surface walking top water lures like the new DOA “PT” and DOA Baitbusters in shallow water for snook.

Reds will spread out on shallow grass flats in November. You should find them along bars, in potholes or around docks. Look for them along mangrove shorelines when the tide is high, but they are just as likely to be roaming with mullet schools in shallow water. CAL jigs with shad tails, grubs or jerk worms and gold spoons should work well for reds in shallow water. Fly anglers may score with lightly weighted flies, such as Clousers, spoon flies or my Grassett Flats Minnow fly. I catch a lot more reds wading than from the deck of my boat, so keep a low profile.

You may also find big trout along with reds in shallow water this month. The same lures and flies that you use for snook and reds in shallow water will also work for trout. You’ll also find trout on deep grass flats in water from 3’ to 7’ deep. I like to drift and cast quartering ahead of my drift with CAL jigs, DOA Deadly Combos or weighted flies on sink tip fly lines to locate trout. In addition to making a series of drifts to find fish, look for baitfish on the surface or birds to find them. 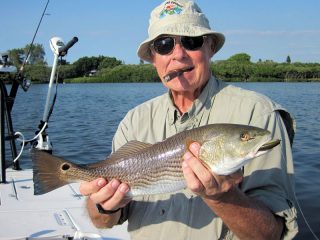 Keith McClintock, from IL, with a nice Red he caught and released in sarasota Bay in a previous November.

You may also find blues, Spanish mackerel, flounder or pompano on deep grass flats this month. The techniques to find them is the same as for trout, although blues and Spanish mackerel may feed on the surface making them easier to find. Likewise with pompano, that may skip on the surface when you run or drift past them. When that happens, circle back upwind and drift back through the area, casting ahead of your drift. I like a 1/16 or 1/8-ounce chartreuse CAL jig head with a gold grub for pompano. You’ll need to add wire or heavy fluorocarbon when toothy fish are around to keep them from biting you off.

You may find flounder on a mixture of grass and sand, particularly on the edges of bars or in potholes. There should be good action in the coastal gulf with false albacore (little tunny), Spanish and king mackerel, blues, tripletail or cobia. Look for Spanish mackerel, blues or false albacore feeding on the surface to find them.

Diving terns or terns hovering just above the surface of the water and moving fast will give their presence away if they aren’t on top. CAL jigs with shad tails and jerk worms and top water plugs will work well. Fly anglers should score with small white flies, Ultra Hair Clousers, poppers or Crease flies. Look for tripletail around crab trap floats and cast DOA Shrimp, CAL jigs with shad tails or DOA TerrorEyz to them. 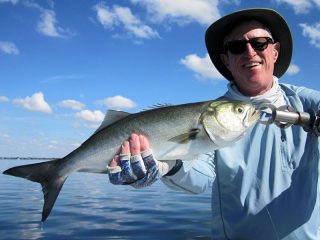 Marshall Dinerman, from Lido Key, with a nice bluefish caught and released in Sarasota Bay on CAL jigs with shad tails on a trip with Capt. Rick Grassett.

Cobia may also be found around crab trap floats, swimming on the surface or over structure. They will require medium-heavy spinning tackle or at least a 9-weight fly rod.

This a great month for fishing the flats or the coastal gulf. Since the action in the coastal gulf is seasonal and will end when it gets cooler, I like to fish there when conditions allow it. However, if that’s not for you or if conditions won’t allow it, there will be plenty of action for a variety of fish on shallow and deep grass flats of Sarasota Bay.

Our natural resources are under constant pressure from red tides fueled by agricultural, industrial and residential runoff and discharges, freezes, increasing fishing pressure and habitat loss and degradation, please limit your kill, don’t kill your limit!