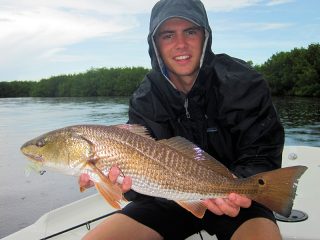 Tarpon will still be a good option this month. Shallow water action for reds and big trout will be best early and late in the day. Some of the best action will be with trout, blues, pompano and more on deep grass flats. Catch and release snook fishing in the ICW at night or in the surf should also be good options.

Tarpon fishing should be good in the coastal gulf this month. Large schools of tarpon will dwindle in size and numbers to singles, doubles and small schools of post spawn fish during July. I usually find tarpon to be aggressive in July, with spawning completed and after a long migration, they usually feed aggressively.

I also find them to be more curious this time of the year often swinging closer to check out the sound of a landing bait, lure or fly. Spin anglers will do best by setting up in travel lanes and drifting live baits under floats while staying ready to sight cast to fish that may pop up with no notice. The DOA Baitbuster is my “go to” lure for tarpon. The DOA Swimming Mullet, 4” Shrimp and CAL 4” swim bait are also good choices depending on the situation. I like the Owner Beast hook with the CAL swim bait. It is easier to penetrate a hard tarpon mouth with a single sharp hook rather than a treble hook.

This is my favorite time to fly fish for tarpon. The tactics are the same as earlier in the season, anchoring or staking out on travel routes, although fish are in a better mood. Unlike the large tarpon schools that we see around full and new moon phases in June, July fish are usually aggressive. Large schools of tarpon are impressive, but if you spook the lead fish you will spook all of them.

Tarpon will thin out towards the end of the month as they begin to move to inside waters of Sarasota Bay, Tampa Bay and Charlotte Harbor. They move into these areas to rest and feed following spawning. They can be targeted in these areas with flies, a variety of DOA lures or live bait. Also look for tarpon feeding in schools of “breaking” ladyfish in these areas. 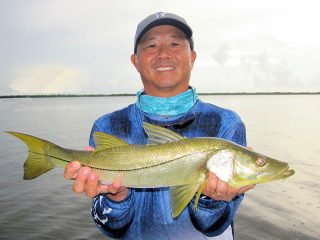 Snook, reds and spotted seatrout remain closed to harvest on the west coast of Florida. The Florida FWC has extended a temporary modification of regulations for reds, snook and trout, in the areas affected by the recent red tide. The area extends from Pasco County, south to the south bank of Gordon Pass in Collier County. Reds, snook and trout are catch and release only in that zone until May 31, 2021.

Full details including exact boundaries can be found at by CLICKING HERE. This is great news for our fishery! Sarasota Bay is rebounding and the continued closure will make it even better.

Catch and release snook fishing will be a good option this month. With very warm water this time of year, it is important to use tackle heavy enough to land them quickly. Spin anglers should do well fishing lighted docks and bridges in the ICW with CAL jigs with shad tails or jerk worms or DOA shrimp. Fly anglers should do well with clear intermediate sink tip lines and wide profile flies, such as Lefty’s Deceiver or EP flies, since larger baitfish may be more predominant. Docks and bridges close to passes should be the best ones. You’ll also find snook in the surf, where you can walk along the beach and sight cast to them in shallow water. A DT Special is a “go to” fly for many snook surf anglers.

You’ll find reds very active in shallow water this month. With plentiful baitfish and higher tides, they’ll spend more time feeding over shallow grass flats. Look for them along the edges of bars or in potholes when the tide is low or along mangrove shorelines and around oyster bars when the tide is high. You’ll also find big trout in many of the same areas where you find reds, but the bite for big trout is usually best early or late in the day. Surface walking top water plugs or fly poppers and Gurglers may draw some big explosions! Casting CAL jigs with shad tails or jerk worms ahead of your boat is a good way to locate reds.

I like to drift deep grass flats and cast ahead of my drift with CAL jigs and shad tails or jerk worms, DOA Deadly Combos or Ultra Hair Clouser flies tied on long shank hooks on sink tip fly lines to find trout. A drift anchor will slow your drift to a more manageable speed if it’s windy. Look for birds or baitfish on the surface to find fish. You may find Spanish mackerel, blues, pompano and more mixed with trout on deep grass flats. Flats close to passes or on points that get good tidal flow are usually productive.

In addition to tarpon, you might find false albacore (little tunny), tripletail or cobia in the coastal gulf this month. Look for albies feeding on the surface. I have seen large schools of albies “blitz” the beach while tarpon fishing this time of year. They are usually feeding on larger baits, such as threadfins or pilchards, so flies and lures should be sized accordingly. You might even find cobia swimming with tarpon or cruising bars in shallow water along the beach. You can use your tarpon fly or spin tackle for cobia, but a medium spinning outfit or an 8 to 9-weight fly rod will be better suited for mackerel and albies. I also occasionally run into tripletail this time of year, either around a crab trap buoy, navigational marker or floating debris.

There are lots of options this month, late season tarpon, snook in the surf or at night or fishing skinny water for reds or big trout. Tarpon fishing is best when sweat is pouring down your back, but you’ll want to fish early in the day in shallow water.