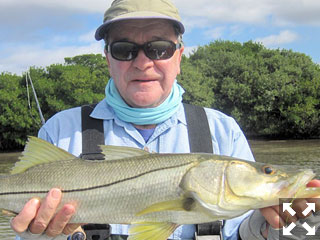 Nick Reding, from St. Louis, waded a sandbar to catch and release this snook on a fly in a previous January with Capt. Rick Grassett.

You may find reds and big trout concentrated in potholes in January. Action with trout, blues, Spanish mackerel, pompano and more on deep grass flats can be good depending on conditions. There should also be good catch and release snook action in rivers, creeks and canals this month, although fishing docks for snook and other species is also a good option. It may be worth checking the coastal gulf for tripletail, cobia, false albacore (little tunny) and more when it’s warm.

Snook, reds and spotted seatrout are closed to harvest on the west coast of Florida. The Florida FWC has enacted a temporary modification of regulations for reds and snook, in the areas affected by last year’s red tide. The area extends from Pasco County, south to Gordon Pass in Collier County. Reds, snook and spotted seatrout (of any size) are catch and release only in that zone until May 31, 2020. Full details including exact boundaries can be found by CLICKING HERE. Since these species are now closed, use tackle heavy enough to catch and release them quickly.

Snook are very temperature sensitive, so I won’t target them if the water temperature dips below 60 degrees. However, fishing lighted docks in the ICW at night with lures and flies can be very good in January. Small white flies, like my Grassett Snook Minnow, Gurglers and shrimp fly patterns will work well for fly anglers. Spin anglers should score with CAL jigs with shad tails or 4” jerk worms, DOA Tiny TerrorEyz and DOA 2-3/4” & 3” Shrimp. Fish peak tidal flows for the best action. 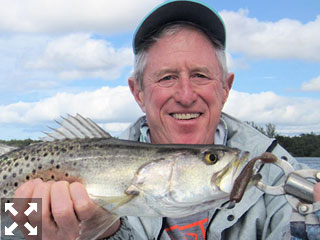 Marshall Dinerman, from Lido Key, with a big trout caught and released on a CAL jig with a shad tail while fishing in shallow waters with Capt. Rick Grassett in a previous January.

You should also find snook in rivers, creeks and canals this month. Fish deeper water in outside bends to locate snook where you may catch them with CAL jigs and shad tails or jerk worms, DOA Baitbusters or diving/suspending plugs. You may also find reds, juvenile tarpon and even largemouth bass in the same areas depending on salinity.

Reds should be a good option this month. You’ll find them concentrated in potholes when the tide is low. Fly anglers should score with lightly weighted flies fished on a 10’-12’ leader with a floating fly line. Reds feed on crustaceans this time of the year, so crab and shrimp fly patterns should work well.

They may tail on shallow grass flats when the tide is low. You’ll need weedless rigged plastic baits or flies with weed guards to target tailing reds. A CAL shad tail on a weedless hook or a DOA shrimp rigged weedless and fished backwards are a couple of my favorite lures for tailing reds.

You may also find reds around docks, along with snook, sheepshead, flounder and more. Little Sarasota Bay has numerous oyster bars and docks that often hold reds in January. Work CAL jigs slowly along the bottom for the best action. You’re likely to find big trout in many of the same areas that you find reds. The same lures, flies and techniques that are used for reds will also work for big trout. 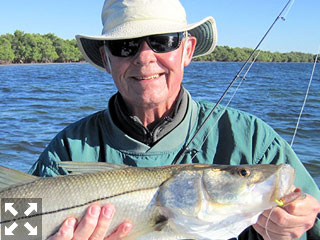 Keith McClintock, from Lake Forest, IL, with a nice snook caught and released on a CAL jig with a shad tail while fishing shallow water with Capt. Rick Grassett in a previous January.

You’ll also find trout on deep grass flats in January along with blues, Spanish mackerel, pompano, flounder and more. I like to drift and cast ahead of my drift with CAL jigs and a variety of plastic tails and DOA Deadly Combos. Since trout can sometimes hold very tight to a particular spot or area, try to cover as much water as possible to find them.

Once you’ve located fish you can shorten your drift or anchor on them. A GPS can be useful for this type of fishing since the breadcrumb trail will allow you to duplicate your drift. A drift anchor will slow your drift so you can fish it more thoroughly or make it easier for fly anglers to move their fly.

My favorite deep grass flats, have a good mix of grass and sand with a strong tidal flow. Even though there may not be much happening in the coastal gulf this month in the way of sight fishing it may be worth a look when it is warm.

Migratory species such as king and Spanish mackerel, cobia and tripletail probably have moved further south, however they could reappear during warm ups. Also look for false albacore (little tunny) when it’s warm since they may move from offshore to inshore depending on where baitfish are located. 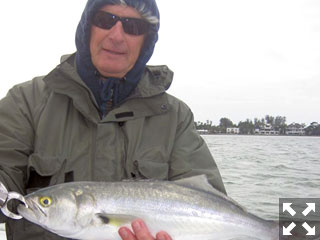 Steve Kost, from Lakewood Ranch, with a nice bluefish caught and released on a Clouser fly while fishing deep grass flats in a previous January with Capt. Grassett.

January can be one of the toughest months of the year to fish. However if you are able to choose when to fish based on tides and weather, it can be good. Action is usually good as weather fronts approach.

Following fronts, fishing may be tough for a couple of days so afternoons may fish better at that time. I’ll let the stage of the tide determine where to look for fish. When the tide is low, look for reds tailing on shallow grass or reds, trout and more in potholes or around docks.

Look for reds or big trout cruising on shallow grass flats on sunny afternoons when the tide is high.