Tarpon will move into estuaries this month. You may also find juvenile tarpon in creeks, canals and turning basins. Reds should be schooling on shallow flats and big trout will prowl the same waters at dawn. Also look for trout on deep grass flats mixed with blues, pompano, Spanish mackerel and more. Catch and release snook fishing should be good around lighted docks at night or in the surf. Look for false albacore (little tunny) to possibly show up in the coastal gulf later in the month. 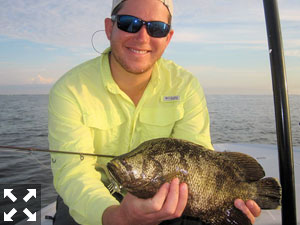 Tarpon addicts will still be able to get their fix this month. You should still find a few tarpon in the coastal gulf early in the month. Drifting live baits or casting flies, DOA Baitbusters, DOA Shrimp and DOA 4” CAL shad tails should all work. As tarpon thin out along beaches, they will move to inside waters where you may find them schooling around bridges or rolling on deep grass flats. They will also feed in schools of ladyfish that are feeding on the surface. You should also find juvenile tarpon from 10 to 30-pounds in creeks, canals, and turning basins.

Your snook tackle will work fine for smaller tarpon although you’ll need a leader of 40 to 60-pounds to keep them from going through it. Fly anglers should score with 8 or 9-weight fly rods, floating or sink tip lines and scaled-down tarpon flies.

Snook, reds and spotted seatrout are closed to harvest on the west coast of Florida. The Florida FWC has enacted a temporary modification of regulations for reds and snook, in the areas affected by last year’s red tide. The area extends from Pasco County, south to Gordon Pass in Collier County. Reds, snook and spotted seatrout (of any size) are catch and release only in that zone until May 31, 2020. Full details including exact boundaries can be found at ‘www.myfwc.com Since these species are now closed, use tackle heavy enough to catch and release them quickly. 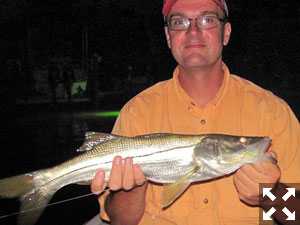 You’ll find snook around lighted docks and bridges in the ICW and in the surf. Small white flies, like my Grassett Snook Minnow, DOA Shrimp or CAL jigs with shad tails and jerk worms should all work well. The same lures and flies will work at night and in the surf, although you should be observant of what size baits are in those areas.

Reds should school up this month, although their numbers have been thinner for the past couple of years. You should find them on shallow flats where they’ll be easier to find when the tide is low. Look for “nervous” water when it is slick calm or a slick patch of water when there is a ripple on the water. They may push a wake that looks like a boat wake. I try to be as quiet as possible in shallow water, poling to locate them.

Once you’ve located a school of reds, try to get ahead of them to intercept them, much like tarpon fishing. If you work around the edges of the school, you may be able to catch a few of them before they spook. We often also find big jacks, blues and other predators in the mix along with reds. Topwater plugs and fly poppers or Gurglers may draw some big bites. The DOA PT-7 topwater bait and 4” CAL shad tail should both work well on schooling reds.

Trout fishing should be good this month. You may find a big trout in skinny water at first light. Focus on mullet or bait schools to find them. Topwater plugs, fly poppers or Gurglers should be very effective at that time of day. Handle big trout over 20” gently, since they are usually females that may be full of roe. I like the same areas for big trout that I like for reds. 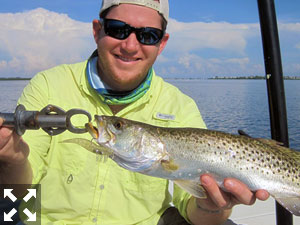 Raul Ortiz holds a nice trout he caught and released in a previous August with Capt. Rick Grassett.

After it gets bright and starts to warm up, drop out to deeper grass flats (4’ to 8’) for trout and more. I like to drift and cast ahead of my drift with CAL jigs and shad tails or jerk worms or an Ultra Hair Clouser fly fished on a sink tip fly line. I make a series of drifts to locate fish and then shorten the drift or anchor depending on conditions. Ladyfish may feed in glass minnow schools and if they stay up long enough, it will attract trout, blues, mackerel, tarpon or sharks.

Wide profile plastic baits or flies fished slowly around the edges of breaking fish will help keep ladyfish off your lure or fly and give you a chance to catch a tarpon. When blues, Spanish mackerel or sharks are in the mix, add 6” of wire or heavy fluorocarbon. Also look for tripletail around crab trap floats, buoys or channel markers in inshore waters this month. A CAL shad tail or DOA shrimp rigged weedless or my Grassett Flats Minnow fly with a weed guard should get the job done. 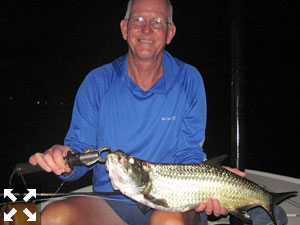 Bob Delano, from GA, with a juvenile tarpon caught and released in a previous August with Capt. Rick.

You might find false albacore (little tunny) or Spanish mackerel in the coastal gulf this month. Look for baitfish to find them. The Tampa Bay ship channel is often one of the first areas where I find them this time of year. Small white flies, like my Grassett Snook Minnow, poppers or Crease flies should all work well. Spin anglers should score with CAL jigs and shad tails. You’ll need to add wire or heavy fluorocarbon when toothy fish are around.

Even though it is one of the hottest months of the year, there are lots of options this month. I usually tarpon fish as long as I can either in the coastal gulf or in inside waters. An early start for snook or tarpon around lighted docks or bridges and then on the flats for reds, trout and more is a good option.