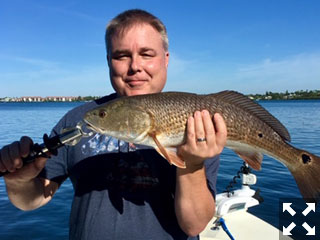 That is one good looking Redfish caught and released this past week in Sarasota Bay.

The fishing over the holidays was very good, with water temps in the mid 60’s. Fishing the passes with live bait produced sea bass, snapper, jacks, and a good run of pompano. The sheepshead are also moving inshore and should produce some good action this winter.

On several calm days I finished off the trip running the crab buoys which produced several tripletail up to 26 inches. We also fished some flats and backwater oyster bars, catching and releasing trout, jacks and redfish. The water quality is good and Sarasota Bay is recovering.

I’d like to stress the importance of catching and releasing until the fish in our bay recover.

Kelly is a Sarasota native and the owner and operator of Mangrove Charters. He's pas­sion­ate about fishing and hunting. As a full-time fishing guide Kelly operates out of a 22 ft. Bayscout and specializes in light tackle using both arti­fi­cial and live bait. Redfish are his favorite.