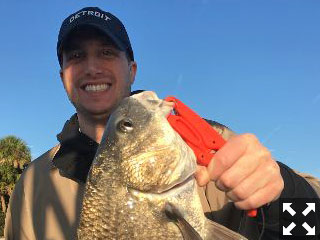 Ben Friedman of New York with a nice black drum.

Speckled trout, ladyfish, black drum, mangrove snapper, Spanish Mackerel and jack crevalle were all on the current list of the fish being landed the past few days.

Customers used live shrimp, buck tailed jigs and DOA CAL jigs to hook and catch this variety of species. Several large gafftop sailcats were also in the mix as strong winds made the fishing a bit tougher.

Remember, the best time to go fishing is when you can and be sure to save some for seed!

Jef­fri is a fourth generation native Floridian who grew up in Bowling Green, Florida, located in Hardee County. While growing up on a cattle and citrus operation Jef­fri fished many creeks and lakes in the central Florida area as well as the Peace River.