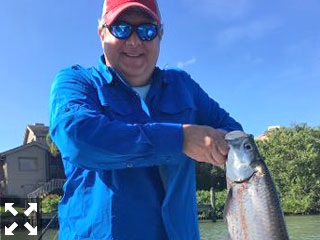 John Hoeksema shows off this small tarpon he caught and released this past week.

Area beaches are producing Spanish mackerel, and be on the look for tripletail when running the crab pot bouys. With the warm water we have had this fall the kingfish run has been very slow as the fish moved out in the cooler water offshore.

The bay also has Spanish mackerel along with speckled trout, mangrove snapper, redfish, bluefish, ladyfish and jack crevalle (remember that trout, snook and redfish are closed to harvest so handle with care while releasing). John Hoeksema caught a variety of fish recently with the top catch being a small tarpon in an area canal.

Most of the fish caught were on a variety of baits from live shrimp, CAL jigs and bucktailed jigs as well as mirror-dines and skitter walks for great top water action. Team Top Down fished three king mackerel tournaments this fall and were out of the money in all three. Caught lots of fish but not the large king mackerel they were looking for.

Remember, the best time to go fishing is when you can and be sure to save some for seed!

Jef­fri is a fourth generation native Floridian who grew up in Bowling Green, Florida, located in Hardee County. While growing up on a cattle and citrus operation Jef­fri fished many creeks and lakes in the central Florida area as well as the Peace River.