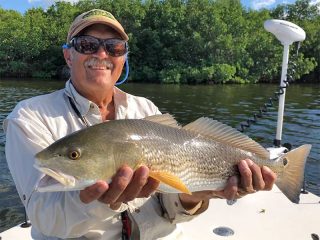 Anglers fishing with Quiet Waters Fishing out of CB’s Saltwater Outfitters in Sarasota, FL found action on the flats for snook, redfish, and seatrout. Pinches and points were good places to find fish on the flats in the beginning of November.

Weather was a factor on recent trips. Fishing really came alive for Scott & Julia of Idaho when we fished before a front. We found willing snook and redfish bunched up over a sandy flat that was saturatd with bait. Later we had more excitement when we found a larger redfish in a trough that we were able to sight cast to and hook.

Fishing after the front was much harder work. Jim & Dave fished on a day after a full moon with high pressure and it showed. We moved plenty of fish, but they were sluggish, non-committal, and a bit out of sorts. Jim caught a very healthy snook on a modified clouser while fly fishing in the late morning. Redfish became more active later in the day and we brought a few boat side.

Snook
Snook were clustered up in smaller areas on the flats. We found larger fish solo, patrolling points or in buckets near depth transitions. Snook were extremely aggressive before the front moved in. The Aquadream ADL series spoon worked well on these aggressive fish. The Mirrolure Mirrodine XL was a highly effective bait for snook staked out at ambush points. High pressure pushed snook into deeper water at the beginning of the week. We did not see a snook of decent size in water shallower than 4 to 5 feet.

Seatrout
Smaller class size seatrout were in areas with deeper grass and fed aggressively. Larger seatrout were present in potholes in 3 -5 feet of water. Soft plastic paddle tails on jigs worked well. This is an ideal time of year to find gator trout in very shallow water. Using plugs and topwaters in the morning can be a good way to find larger seatrout.

Redfish
Redfish were eating well and seemed much less affected by the high pressure. We found mid-sized redfish spread out and working points and pinches between islands. Before the front, smaller reds were working in groups along sand and grass transitions and larger fish were parked in troughs. All of them were hungry and provided good action. Spoons were the pied piper for redfish.

Looking Ahead
Cold front cycles are beginning to take hold. We have not had a significant drop in temperatures yet, but we are cooling and the writing is on the wall. False albacore season is just about here. A few captains have reported catching their first ones. Tripletail are still a good option around crab floats off of the beaches. Larger redfish have remerged on the flats and that is exciting news. As temperatures continue to drop, we should begin to see better action in brackish rivers, creeks, and the back country.

Brian, owns and operates Quiet Waters Fishing LLC and runs his trips out of a 17’ Maverick Mirage. He covers water as far north as Tampa Bay and south to the Charlotte Harbor/Boca Grande area. His favorite trips to offer are: back country, shallow flats, night tarpon, & night dock light snook trips.