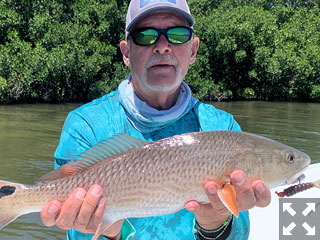 Mike Perez, from Sarasota, with a red he caught and released on a CAL jig with a grub tail while fishing Sarasota Bay recently with Capt. Rick Grassett.

Anglers fishing with me, out of CB’s Saltwater Outfitters on Siesta Key, had some action catching and releasing trout on deep grass flats and redfish in shallow water on CAL jigs with grub tails and flies in Sarasota Bay recently.

Tarpon numbers are increasing in the coastal gulf and a fly angler fishing with me caught and released the first tarpon of the season recently. In light of the current situation, social distancing and sanitizing procedures were followed on the boat.

Vince Sharp, from Sarasota, caught and released his first tarpon on a fly while fishing the coastal gulf with me. He was a student in a CB’s Saltwater Outfitters Orvis-Endorsed fly fishing school and wanted to hone his saltwater skills with tarpon as a goal. Well done! 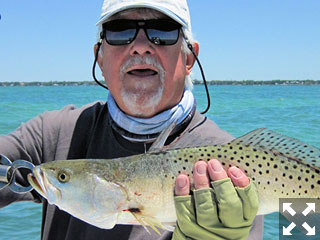 Bill Morrison, from Anna Maria, fished Sarasota Bay with me on another trip and had some action catching and releasing trout to 19”on an Ultra Hair Clouser fly. Mike Perez, from Sarasota, connected with several reds on a CAL jig with a grub while fishing Sarasota Bay with me recently.

Tarpon fishing in the coastal gulf is a good option now depending on conditions. Fishing shallow flats for catch and release reds and snook is also a good option. Fishing deep grass flats of Sarasota Bay is a good choice for action with a variety of species including trout, pompano, blues and Spanish mackerel. Fishing dock lights in the ICW at night is usually dependable for snook and more.