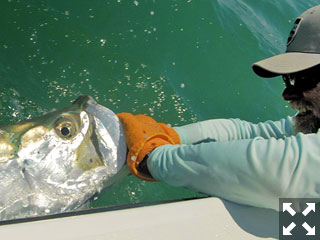 May should be a great month to fly fish for tarpon in the coastal gulf.

Tarpon fishing will take off during May as migratory fish arrive along our beaches. Also look for Spanish mackerel, tripletail, cobia and false albacore (little tunny) in the coastal gulf. Snook will move into passes and the surf and reds and trout should feed heavily on shallow flats as baitfish become more plentiful. Trout, blues, Spanish mackerel and more should be good options on deep grass flats.

Resident tarpon are usually the first to show up as they make their way out of rivers and creeks. As migratory tarpon start to arrive this month, we should have schools of tarpon moving both north and south along our beaches. Early arriving tarpon may be more aggressive due to less fishing pressure early in the season. Set up in their line of travel and wait for tarpon schools to move past and cast a DOA Baitbuster, a 4 inch CAL Shad, a live crab or pinfish to them. Once you’ve seen the first school of fish, you can concentrate your efforts in that lane since other schools should be following the same route.

When they aren’t showing well on the surface, a live bait under a float in their travel lane may score. I’ve also done well blind casting a DOA Baitbuster or Swimming Mullet when there wasn’t much showing on the surface. Be quiet and using your electric trolling motor sparingly. Even though your 4-stroke outboard sounds quiet, it is no substitute for an electric trolling motor. Give other anglers at least several hundred yards of space and keep in mind that fish can be moving either north or south so setting up too close to another angler may affect their flow of fish.

Fly anglers should do well with a variety of baitfish or crab fly patterns fished on floating or intermediate sink tip fly lines. Staking out or anchoring in shallow water on their travel route should result in some shots at fish. The best angle is a “head on” shot, followed by a quartering shot. A perpendicular shot may work if it’s timed perfectly, although casting too far beyond their line of travel will usually spook them. I use a push pole with an occasional assist from a trolling motor if I need to adjust my position to make a cast. 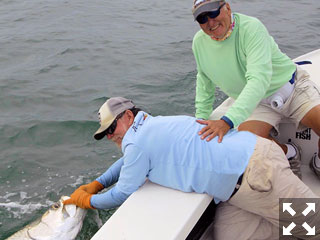 There are few fishing experiences that compare to the experience of battling a tarpon in open water.

Snook, reds and spotted seatrout remain closed to harvest on the west coast of Florida. The Florida FWC has extended a temporary modification of regulations for reds, snook and trout, in the areas affected by the recent red tide. The area extends from Pasco County, south to the south bank of Gordon Pass in Collier County. Reds, snook and trout are catch and release only in that zone until May 31, 2021. Full details including exact boundaries can be found by CLICKING HERE. This is great news for our fishery! Sarasota Bay is rebounding and the continued closure will make it even better.

Snook will be spawning this month so use tackle heavy enough to catch and release them in a timely manner and handle them gently. Larger snook will mostly be females and should always be supported horizontally rather than hung vertically by the jaw. You’ll find them in passes and in the surf. They will also stage around docks and bridges close to passes. Casting CAL jigs with shad tails and jerk worms or DOA shrimp around docks and bridges close to passes should be effective. Small white flies, like my Grassett Snook Minnow, work well at night. One of the most fun ways to target snook is to walk the beach and cast CAL jigs, DOA shrimp or flies to them in the surf.

Higher tides this month will mean that reds will spend more time feeding on shallow flats. Look for them along mangrove shorelines and around oyster bars when the tide is high and in potholes or along sandbars when the tide is low. When fishing shallow water for reds, be as quiet as possible. I prefer to use a push pole or wade. Reds are one of the most challenging species to catch on a fly. Since they can be very spooky, I often wade for them when fly fishing to keep a lower profile.

You’ll also find big trout in many of the same shallow areas that you find reds. They will be plentiful on deep grass flats. I prefer to cast CAL jigs and flies on sink tip fly lines for trout. A DOA Deadly Combo also works very well. Drifting and casting ahead of the drift is usually the most productive method. Look for flats that have a good mix of grass and sand and good tidal flow. 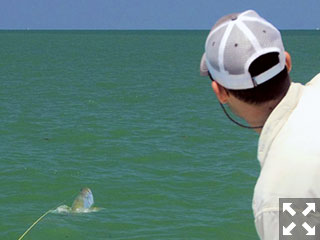 Sean Sherman, from NYC, caught and released this tarpon on a fly while fishing the coastal gulf with Capt. Rick Grassett in a previous May.

You may find pompano, bluefish and Spanish mackerel on the same deep grass flats where trout are plentiful. They can be targeted in the same way as trout, but you may need to use wire or heavy fluorocarbon leader when toothy fish are around. You may also find Spanish and king mackerel, little tunny, cobia and tripletail in the coastal gulf.

Keep your eyes open for surface activity such as diving birds, breaking fish or baitfish being forced out of the water which could indicate the presence of mackerel, blues or little tunny. Medium spinning tackle and 8 or 9-weight fly tackle should be heavy enough, although your tarpon spinning and fly tackle is not too heavy for cobia. Look for cobia either swimming on the surface or around navigational markers or buoys.

I have also found cobia swimming with schools of tarpon before. Tripletail may be found around crab trap floats or buoys, where they can be targeted with a DOA shrimp or CAL jig on spinning tackle. When fly fishing for tripletail, a floating line on an 8 or 9-weight fly rod with a shrimp or baitfish fly pattern, like my Grassett Flats Minnow, should get the job done.

This is one of my favorite months of the year. If battling a big tarpon isn’t for you, you should have plenty to do on both shallow and deep grass flats or in the coastal gulf. I’ll be spending my time targeting tarpon in the coastal gulf unless conditions won’t allow it. There is something about casting a fly to a giant fish in shallow water! Our natural resources are under constant pressure from red tides fueled by residential, agricultural and industrial runoff, freezes, increasing fishing pressure and habitat loss and degradation, please limit your kill, don’t kill your limit!