There should be good action with reds, trout and snook in skinny water in March as baitfish become more plentiful. Look for Spanish and king mackerel, cobia, tripletail and false albacore (little tunny) in the coastal gulf. Night snook fishing in the ICW should also be a good option this month. 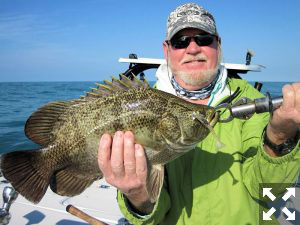 Look for tripletail in the coastal gulf during March.

Snook and reds remain closed on the west coast of Florida. The Florida FWC has enacted a temporary modification of regulations for reds and snook, in the areas affected by the recent red tide. The area extends from Pasco County, south to the south bank of Gordon Pass in Collier County.

Reds and snook are catch and release only in that zone until May 10, 2019. Full details including exact boundaries can be found HERE. In addition, FWC has also added trout over 20” to the closure in the same area.

This should be a good month for snook fishing at night around lighted docks and bridge fenders in the ICW. DOA Shrimp, CAL jigs with shad tails and small white flies, like my Grassett Snook Minnow, usually work well at night since glass minnows and shrimp are the predominate bait. Focus on shadow lines where light meets dark and fish strong tides for the best action. Although snook may also be found in rivers, creeks or canals in March, they will also start to move onto shallow flats, particularly on sunny afternoons when it’s warm. I like larger lures like CAL jigs with jerk worms, CAL 4” Shad Tails, DOA Baitbusters and the new DOA PT soft plastic topwater lure or wide profile flies like Clousers, Deceivers and EP flies, for snook on the flats.

Look for early season tarpon that may start to show in backcountry areas. These are usually adult resident fish that are making their way out of rivers and creeks. They may be “laid up” or rolling on deep grass flats, on edges of shallow flats or along bars when it is calm. An accurate cast with a DOA Shrimp or Baitbuster or a Deceiver or Tarpon Bunny fly may result in an explosive strike! Look for them in areas of Sarasota Bay, lower Tampa Bay or in Gasparilla Sound on some of the same deep grass flats where you find trout. 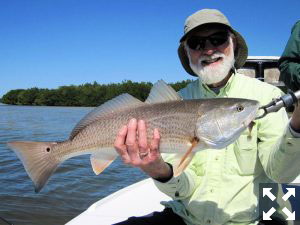 Reds should be a good option during March. Chuck Hempfling, from IL caught and released this one on a CAL jig with a shad tail.

Reds should be more active as the water warms and baitfish become more plentiful. Higher tides, as we head into spring, will allow them to spend more time feeding in shallow water. Look for them over shallow grass, along mangrove shorelines, and around oyster bars when the tide is high. You should find them in potholes and along sand bars when the tide is low. I like the shallow flats of north Sarasota Bay for reds this month.

I like 1/16-ounce CAL jigs with shad tails and jerk worms to locate reds. Fly anglers should score with my Grassett Flats Minnow fly, fished on a 10’-12’ leader. When using a long leader be sure you are able to turn it over, otherwise you’ll need to shorten it until you can. The butt section should be at least 50% of the total length of the leader and stiff enough to transfer energy from your fly line to the leader.

You might also find reds around docks when the tide is low. Look for deep water under docks with a good tidal flow for the best action. A 1/8-ounce CAL jig with a shad tail or grub or a weighted fly fished on a clear intermediate sink tip fly line with a 6’ leader with should work well for dock fishing. 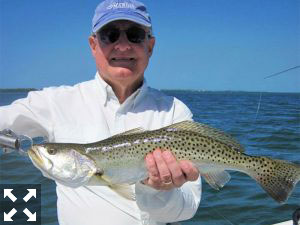 Trout fishing should be good during March. Alan Sugar, from MI, caught and released this one on an Ultra Hair Clouser fly.

You may find big trout in skinny water in many of the same places that you find reds. Blind cast seams where the grass meets sand or focus on the light colored bottom, in potholes on top of sand bars, where you may be able to sight fish them. FWC has also added trout over 20” to the emergency closure on the west coast of Florida through May 10, 2019. These fish are important to the health of our fishery.

You should also find trout plentiful on deep grass flats along with Spanish mackerel, blues, flounder or pompano. I like to make a series of drifts, casting ahead of the drift with CAL jigs with shad tails, DOA Deadly Combos or an Ultra Hair Clouser fly tied on a long shank hook and fished on a clear intermediate sink tip fly line to locate fish.

Also, look for birds, bait showering out of the water or boils on the surface that will indicate fish feeding below. When mackerel and blues are around, you may need to add 6” of 40# to 60# fluorocarbon or wire to your leader.

Topwater plugs and fly poppers also work well when blues and mackerel are around and may help locate them by attracting them from further away. Flounder may be found on sand or mud bottom areas on both shallow and deep grass flats or around docks. Pompano may skip on the surface when you drift or run past them, giving their location away. Fish deep grass flats with a mixture of grass and sand and a strong tidal flow for the best action. 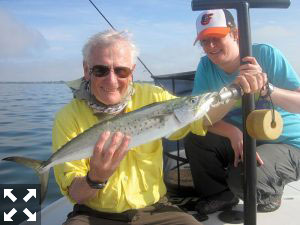 Spanish mackerel should be a good option during March. Tony Merlis, from NH, caught and released this one on an Utra Hair Clouser fly.

You may also find Spanish or king mackerel, false albacore (little tunny), cobia or tripletail in the coastal gulf this month. Look for diving or hovering terns to find Spanish mackerel or false albacore feeding on the surface. ¼-ounce CAL jigs with shad tails or jerk worms or topwater plugs should work well for spin anglers.

Fly anglers should score on tripletail with DOA Shrimp or lightly weighted flies with weed guards. Cobia may also be swimming on the surface as they migrate from south to north following warmer water and baitfish. DOA Baitbusters, Airheads, PT’s and large, wide profile flies, like Deceivers or EP flies would be good fly choices for cobia. In the absence of any fish on the surface, check out one of the many artificial reefs or natural hard bottom areas that may hold baitfish and predators. Drift over a structure and cast DOA Baitbusters or weighted flies on fast sinking fly lines to get deeper in the water column to catch them.

Conditions are usually good during March and fishing should heat up. Flats and night snook fishing are usually good options this month. I like to check the coastal gulf when conditions are good since you could find something really good happening there. Our natural resources are under constant pressure from red tides fueled by agricultural and residential runoff, freezes, increasing fishing pressure and habitat loss and degradation, please limit your kill, don’t kill your limit!