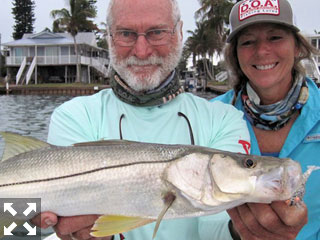 This is a great month for snook on shallow flats. Reds and trout will also be more active as the water warms and baitfish become more plentiful. You might find Spanish mackerel, blues and pompano in passes or on deep grass flats. Look for Spanish mackerel, false albacore (little tunny), cobia and tripletail in the coastal gulf this month. Tarpon should also make an appearance in back country areas and in the coastal gulf later in the month. 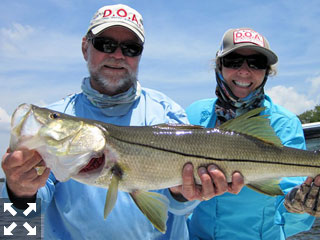 Capt. Rick Grassett with Jenny Nichols in a previous April had good action with snook on DOA Shrimp and CAL jigs with shad tails.

Resident fish may be rolling on deep grass flats in some of the same places that you find trout, laid up on edges of shallow grass flats or along sand bars. Spin anglers might score with a DOA Shrimp, Baitbuster or 4” CAL Shad Tail while fly anglers might connect with a black Deceiver or Tarpon Bunny fly. Keep your tarpon tackle, rigged and ready, this time of year so you’re able to take advantage of any opportunity that arises.

Snook, reds and spotted seatrout remain closed to harvest on the west coast of Florida. The Florida FWC has extended a temporary modification of regulations for reds, snook and trout, in the areas affected by the recent red tide. The area extends from Pasco County, south to the south bank of Gordon Pass in Collier County. Reds, snook and trout are catch and release only in that zone until May 31, 2021.

Full details including exact boundaries can be found by CLICKING HERE. This is great news for our fishery! Sarasota Bay is rebounding and the continued closure will make it even better.

Snook should be staging on flats, around sand and oyster bars, on points of islands and around docks and bridges close to passes in the ICW. Spin anglers should score with CAL jigs and a variety of plastic tails including the 4” CAL Shad, DOA Baitbusters or surface walking top water plugs, like the DOA PT. Fish the edges of bars and potholes when the tide is low and mangrove shorelines or points of islands when the tide is high. You’ll also find snook around docks and bridges in the ICW. Night snook fishing should be productive with small white flies, like my Grassett Snook Minnow fly, CAL jigs with shad tails and jerk worms, DOA Shrimp and Tiny TerrorEyz. Fish peak tidal flows for the best action.

Reds will spend more time feeding on shallow flats due to more plentiful bait. I am seeing a decline in reds and big trout in shallow water in many of the areas that I fish, which makes them even harder to catch with lures and flies. Look for them in potholes, the edges of bars and around docks when the tide is low. You should find them higher on flats over shallow grass or around mangrove shorelines when the tide is high. I like a 1/16-oz CAL jig with a shad tail or jerk worm for reds in shallow water. They are easy to fish in shallow water, come in multiple colors and are a good way to find reds. My Grassett Flats Minnow is my “go to” fly for reds. It fishes well in shallow water and its bend back design makes it very weedless. You may also find big trout in skinny water in many of the same places that you find reds. The same lures, flies and techniques used to find and catch reds will also work for big trout. 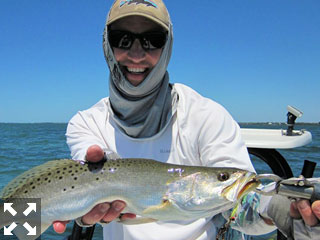 Matt Schenk, from CO, caught and released trout on Ultra Hair Clouser flies while fishing with Capt. Rick Grassett in a previous April.

Trout should be plentiful on deep grass flats. I like to drift and cast ahead of my drift with CAL jigs and a variety of plastic tails or DOA Deadly Combos. Fly anglers should score with weighted flies on sink tip fly lines. I tie Clousers with Ultra Hair on long shank hooks so that they are durable and will hold up to toothy and rough mouth fish. Deep grass flats with a close proximity to passes and usually good due to strong tidal flow.

You might also find blues, Spanish mackerel, pompano or flounder mixed with trout on deep grass flats. The same lures, flies and techniques that you use to find trout on deep grass will work for these species, too. You’ll need to tip your leader with wire or heavy fluorocarbon when blues and mackerel are around. I prefer heavy fluorocarbon and long shank hooks whenever possible, since that usually won’t affect the trout bite. Blues and mackerel usually don’t feed on the surface in the bay like they do in the open gulf, but you may see bait showering or boils indicating fast moving fish, feeding just below the surface. Pompano may “skip” when you run or drift past them giving their location away. When that happens, circle back upwind and drift the area. Flounder are often found in potholes, on the edges of bars or on mud bottom. 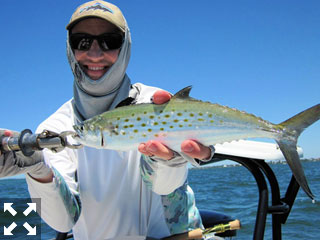 Matt caught and released this Spanish mackerel while fishing with Capt. Grassett in a previous April.

There should be good action in the coastal gulf this month with Spanish and king mackerel, false albacore (little tunny), cobia and tripletail. Look for Spanish mackerel or albies feeding on the surface. You might find tripletail or cobia around crab trap floats.

Your tarpon spin or fly tackle can do double duty for cobia and medium spinning tackle or an 8 or 9-weight fly rod will cover everything else. Artificial reefs or natural areas of hard bottom may hold any of these species. When fishing these areas you will need to get your lure, fly or bait down in the water column to the level where fish are located.

April is one of my favorite months. There should be good action in Sarasota Bay on both shallow and deep grass flats, in the coastal gulf for mackerel, albies, cobia and tripletail and with tarpon by the end of the month. I like early season tarpon, since they are usually aggressive, but there should be lots of other options, too. Our natural resources are under constant pressure from red tides fueled by residential, agricultural and industrial runoff, freezes, increasing fishing pressure and habitat loss and degradation, please limit your kill, don’t kill your limit!